Bridge West Consulting had an opportunity to speak with Matthew Holcombe and Alyssa Pizzo, Business Partners with Cottonmouth Dispensary. Located in Runnemede, New Jersey, Cottonmouth is a 9,100 sqft. recreational dispensary that is being built with many interactive elements to create an immersive experience for customers. Utilizing environmentally sustainable building materials and packaging is also a top priority for Matthew and Alyssa. We are proud to spotlight these trailblazing cannabis entrepreneurs!

Please tell us about your background and how you got started in the cannabis industry.

In 2020, Matthew Holcombe graduated with a science degree, and Alyssa graduated with a dental assistant degree. At the time, Matthew and Alyssa were both 21 years old, and they wanted to learn more about the cannabis industry now that they were of legal age. They began to explore states where recreational cannabis was permitted with the intention of starting a cannabis business of their own. After traveling around the country, they found opportunity in Washington D.C., and quickly relocated from New Jersey to get to work.

Once in Washington, Matthew and Alyssa experienced their marketplace, developed a business plan, built a website, and secured an office space. They studied Washington’s cannabis laws and guidelines as well as the marketplace, to identify niches that were not being targeted. From there, they started Cottonmouth Coaching, a delivery service for recreational cannabis, which was the foundation for the cannabis entrepreneurs they are today. Matthew stated, “Our approach was to make improvements in areas that we thought would benefit the consumer.”

Through their market research, Matthew and Alyssa noticed a considerable issue — other vendors did not have proper product descriptions and pictures on their websites, social media, and delivery service platforms. In many cases, they noticed that the photos and descriptions were inaccurate and could misguide consumers. Alyssa emphasized, “We wanted to make it transparent to the consumer because having been on the consumer side, we know how important it is to accurately depict your products.”

What impact did the pandemic have on your business?

Matthew and Alyssa started their delivery service business in Washington D.C. in the middle of the COVID-19 pandemic. With a lot of uncertainty in the marketplace, they took additional precautions by requiring drivers to wear masks and installing cameras and safeguards in their vehicles. Therefore, they were able to monitor the transactions while their drivers and customers remained at safe distances.

Quickly, Cottonmouth became one of the top-rated cannabis delivery services in Washington DC. They had been growing their business for over two years and decided that it was time to expand and open a storefront. While searching for property, Matthew and Alyssa learned that the Garden State would begin licensing recreational retailers, and they knew they wanted to bring their business back to their home state of New Jersey.

Matthew and Alyssa met Peter Prevot, COO of Bridge West Consulting, and Peter helped them apply for their recreational dispensary license in New Jersey. While they were applying, they discovered that Matthew’s previous cannabis charge would allow him to qualify as a Social Equity Applicant.

Peter helped Matthew and Alyssa construct a business plan and a regulatory compliance plan. He also helped them obtain a structured financial plan so they could present accurate information to potential investors. They approached local entrepreneur, John Soubasis, and he was impressed by their model; he joined their team and has been a great mentor ever since, especially in business development. The next biggest hurdle was finding a property in New Jersey.

As exciting as opening their new business in New Jersey was, they had a difficult time letting go of their previous business in DC. Matthew and Alyssa expressed how hard they worked for the last two years and all the time they had sacrificed, but it got them to where they are today. With the team they currently have behind them, and all of the knowledge they have attained through their delivery service, they are proud to have built up their brand to what it is now.

Alyssa expressed that even though their business is moving to New Jersey, they will continue to provide exceptional service, while also putting additional focus on community relations. “We’re striving to build strong ties with the community and better the lives of the individuals within it. It means a lot to us to be able to bring our business to New Jersey because these are the neighborhoods and communities that raised us.”

Matthew and Alyssa chose Runnemede as the location for their dispensary because it has a strong and growing economy, with lots of new businesses moving in. Matthew said, “It is a great access point since it is close to the Metro area in Philadelphia, and it’s centrally located in Camden County. We expect a large number of customers to flow in from surrounding townships that are not allowing recreational cannabis sales. We also expect a great deal of support from Runnemede being that 77% of the community voted in favor of having recreational cannabis in their town. We are overjoyed and ambitious to make a difference by improving their infrastructure, parks and other aspects of the community.”

The Importance of Building Their Cannabis Industry Advisory Team

Matthew commented, “With Bridge West to help us stay in compliance with laws and regulations, and John to offer business knowledge and back us financially, we finally built a fully capable team. Although Alyssa and I have learned a great deal and acquired hands-on experience in the industry, we know we still have plenty to learn. From the start, we knew it was imperative that we build a strong team of skilled individuals to support us in areas where we fall short. In addition to our current team, we also plan to hire store managers and other employees with previous experience in the industry. Together, as a whole, we will have everything we need to ensure a smooth and safe operation.”

Cottonmouth Dispensary is divided into three distinct sections: an area strictly for cannabis sales, another for cannabis accessories, such as glass and electronic rigs, and the last area is dedicated to Cottonmouth merchandise. From photo-opportunities to an indoor glassblowing display, each section features its own element(s) of attraction.

In the center of facility is a cannabis bar with magnifying glasses above the product displays. Kiosks are situated around the cannabis bar and throughout the facility, to make ordering easy and convenient. The checkout is composed of six terminals: three standard terminals and three express terminals. There is also potential for a drive through.

Outside of the facility is a large green space that will be used to host events to raise money for local causes and support their community. Matthew said, “We have a 9,000 sqft building on over an acre of land, and we intend to make the most of it. Our goal is to implement as many interactive elements as possible, to make for an immersive experience.”

How did you think of Cottonmouth for the name of your dispensary and your brand?

Before starting their business in D.C., they had the name and brand concept for Cottonmouth. This was one of the original names they had thought of, and it quickly grew on them. They received a lot of great feedback regarding the name of the brand as well as the design. The design provided a bit of discretion in that those who do not know the double meaning behind Cottonmouth – the snake and the meaning of it in the cannabis community – wouldn’t directly relate it to cannabis. 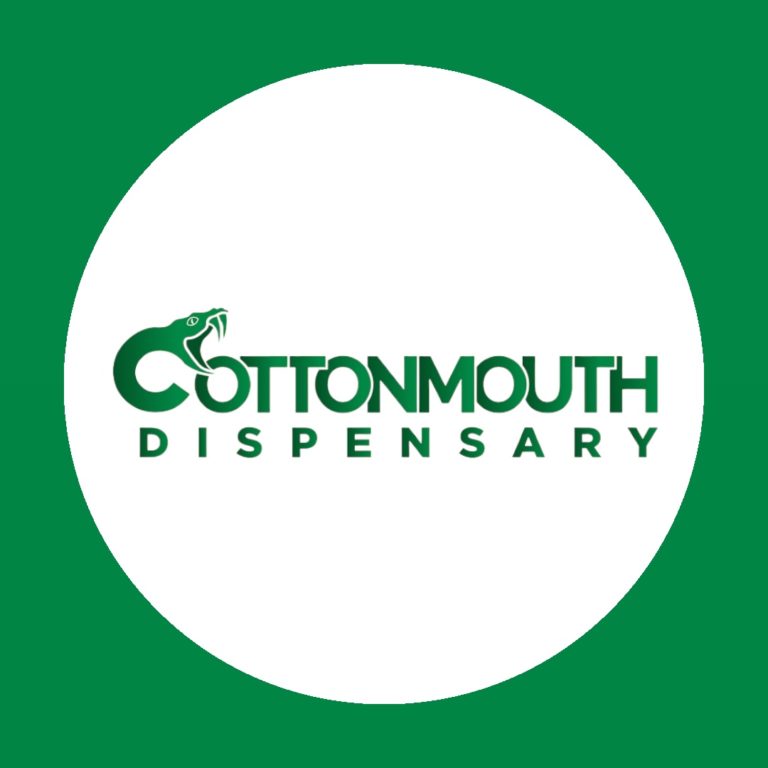 Matthew and Alyssa expressed that they want their brand to maintain a sleek image and not be a “burden” to the community with their design.

As they build their dispensary, Matthew and Alyssa have developed plans to create a visually appealing storefront in their community. On the interior, they intend to create a fresh natural sense with a live green wall lined with a variety of different plants. On the exterior, they expect to landscape and paint a mural on the building to increase their aesthetic and show appreciation for the arts.

What is your plan for creating your team at Cottonmouth?

Matthew and Alyssa want their Cottonmouth team to be comprised of locals from Runnemede, regardless of their experience, to give those in the community a chance to work in their town. Alyssa said, “We want to give back to the community and our employees as much as possible. We have been networking to find individuals for the positions where cannabis experience is preferred but will begin posting advertisements locally to fill the other positions.”

Along with events for their community, Matthew and Alyssa want to host events for their employees where they can bond, enjoy themselves, and be rewarded for their work. “We want to offer as many benefits to our team members as possible. Treating the team is important because happy workers are better workers,” Alyssa commented.

What do you like to do in your free time?

During their free time, Matthew and Alyssa enjoy taking hikes and exploring nature. Matthew said, “It’s always nice to slow down from the fast-pace of life to appreciate the simplicity of the natural world.”

Ask the Cannabis Expert – Professor Dr. Gerry Berkowitz: How does your research support the growth of the cannabis industry?

Ask the Cannabis Expert: Philip Bolen – What was your experience lobbying on the New York medical program?